After moving on to the entrance of the Braunston tunnel last weekend, our domestic battery bank completely failed. We also had no mobile signal and it was the Easter bank holiday, so doubted at this point whether we’d be able to get any help even if we could make a call. It was a bit of a dank place to moor, but we were excited to be ready to tackle the mile and a half long tunnel.

On a boat, having no electricity has greater repercussions than in a house, as not only do you have no power for things like charging your phone or switching on the lights, you also don’t have a water pump. That means you’ve got very limited water. Oh and if you do try to have a bucket wash in the shower, you’ve got no pump to remove the water from the shower base and you then have to bail it out with a cup. Great fun.

That said and done, we still had the stove and so it still felt a bit like fancy camping.

We walked to Braunston in search of help, which we quickly found in the kind couple that work at the Chandlery there. We were relieved when they said they would be able to get an electrician to install new batteries in three days time. They also gave us lots of great tips, having been liveaboards themselves for quite some time.

All we had to do was get to Braunston, and all that stood in our way was the tunnel and six downhill locks neither of which we had done before.

First thing on Easter Monday we prepared to set off. All set to go, we tested our headlight, and it of course didn’t work as it was wired to the domestic batteries which were dead. For better or for worse we took the decision to navigate the tunnel using our head torches.

What we didn’t account for is that once in the tunnel you couldn’t see very much at all. Head torches on a cold, dark morning mostly illuminate the steam from your breath, and each breath we took obscured the light further.

The tunnel also isn’t straight. In the 1700s they started building it by excavating from both ends, planning to meet in the middle. Unfortunately, part of the way there they realised that this was not going to happen and so now there are several turns in the tunnel to accommodate for this.

Laura was on the tiller, with me being a rather rubbish headlight with my torch at the front. Laura couldn’t see anything much other than steam and exhaust fumes, so mostly I shouted out directional instructions whilst panicking that the torch would run out of charge and we’d break down in the dark.

This has happened before, and we’ve heard stories of boaters having to pull themselves a full mile out of the tunnel using the chains at the sides. My body fitness is
very much still 100% at office administrator level. I can sit and type quite happily for days, but actual physical work like that is likely beyond my current capacity. Another lesson learned; get fitter and always keep your headtorch charged. Oh and don’t rely on anything working the way it should. And try not to cry as its embarrassing.

Miraculously, we got through the tunnel without even scraping the edges. We then had to make our way down the flight of locks on the other side in the pouring rain. That went OK until the wind got up. On the penultimate lock, a gust of wind hit the side of the boat and there was nothing Laura could do to counteract it. The boat was pinned to the opposite bank, being drawn by the overflow from the full locks, as well as pushed by the wind. It took some considerable brute force to push away and get the boat into the lock, but it was another good opportunity to learn. It’s pointless trying to steer a 68 foot boat in a side wind!

We made it to Braunston Chandlery by lunchtime, and moored up. 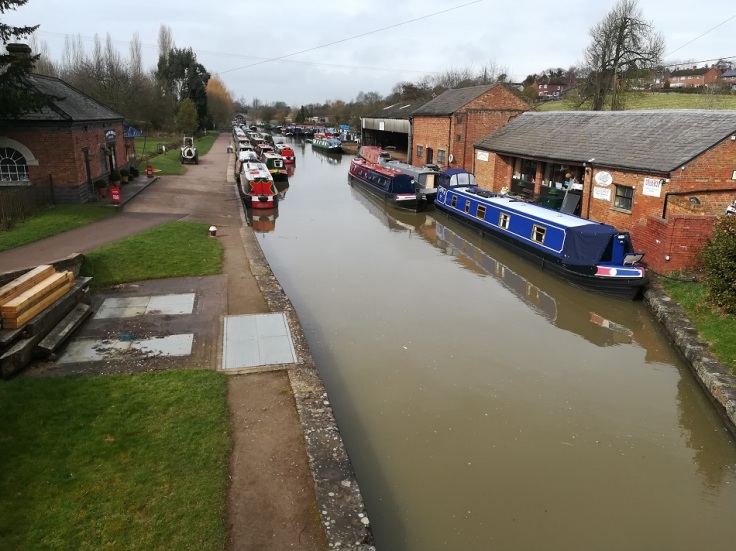 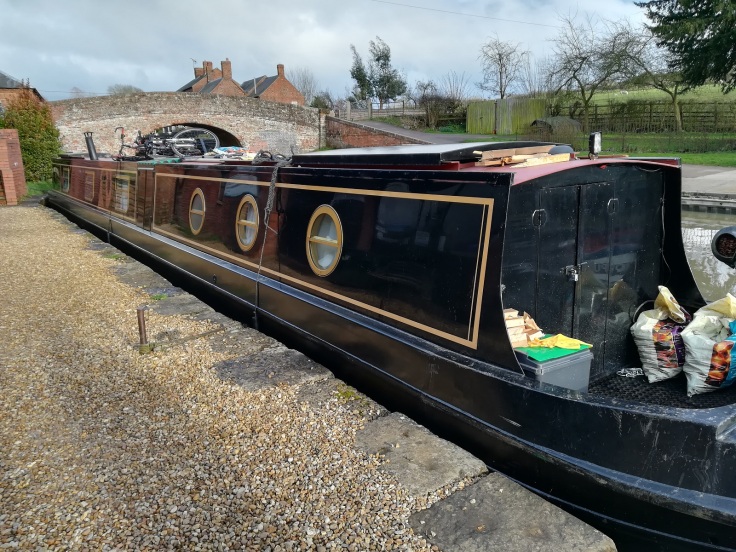 Laura then had to cycle back to retrieve the car. The towpath was deep in sticky mud, so she went for the longer, hillier road route back. This apparently didn’t bother her and she seemed overjoyed to be piloting something as small and simple as a bike.

The electrician who came to help on Tuesday unfortunately found that the mechanical issues were more worrying than a case of replacing tired out batteries. We learned that we needed a new alternator, and probably for the engine electrics to be taken out and totally rewired. He also recommended that we got the engine looked at and the Chandlery gave us the number for a good mechanic at the other end of the village.

So we set off again to make the short trip to the next boatyard. Along the way, we stopped to fill up on water in the hope that we’d be able to have a shower again soon. By this point, we’d been four days without showers and were feeling pretty rank. 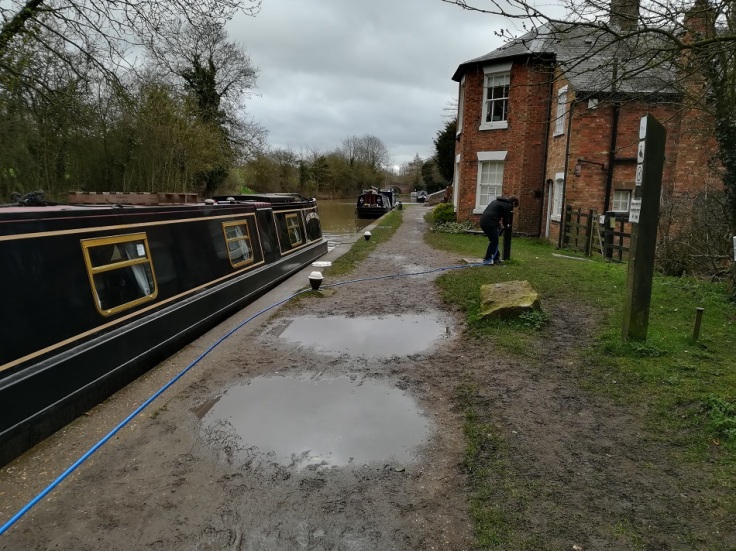 Reaching the boatyard, we were happy to see that right next door were moored a lovely couple we’d met in the pub a few nights earlier. This cheered us up and they gave us a warm welcome. They also assured us that the guys working on our engine are excellent and that we’re in safe hands with them. That was good to hear.

It was slightly unsettling how much the mechanics laughed when they got down in the engine bay and saw the state of things. There was great hilarity and a good deal of colourful language. The wiring from the old alternator was described as ‘bolognese’. We learned that various parts of the engine had been glued on with silicone in a botched effort to stop leaks. She’d been overheating every time we’d cruised and we’d been really lucky not to do some serious damage.

The verdict was that to fix the crucial problems it would take two days, and we’d need to wait a few days for parts to arrive. So with the work scheduled for Tuesday, we’ve settled into our new mooring spot to wait (and stink for a bit longer). Although we’re on a small industrial park, just over the canal there are some beautiful fields and we can walk for miles in the open countryside. Poppy has been loving splashing in the massive puddles. 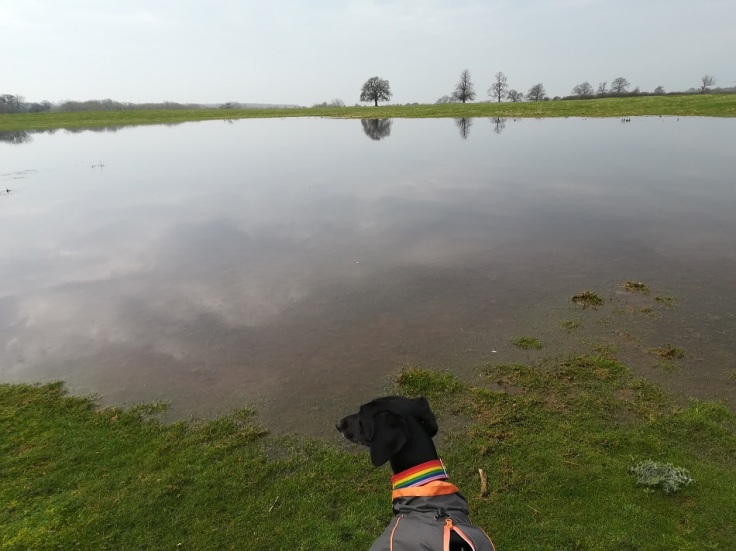 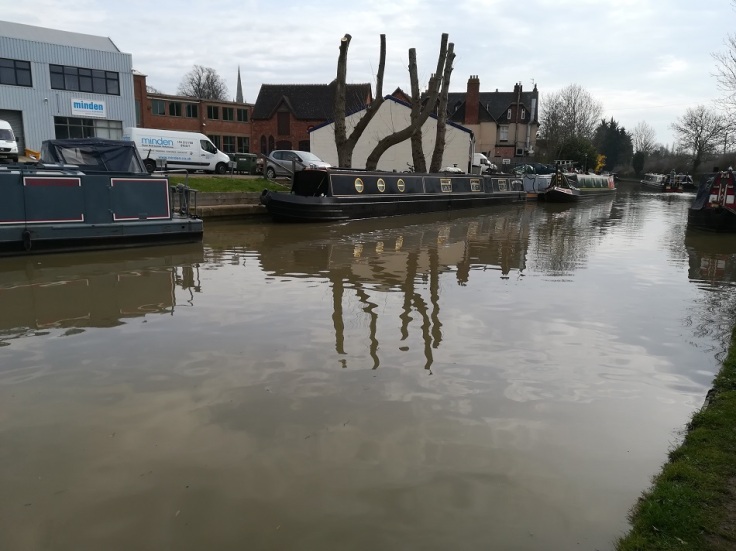 We’ve had some moments of despair in the past week, but we’re starting to figure out how to be patient and chill out about changing our plans. It’s even bothering us less that we’re horribly unwashed and we’re getting entertainment from grossing out the general public.

On Saturday, we went out for a drive to help stave off the stir craziness. I’d read that there was a ‘shopping village’ in Bicester and expected it might be a bit like Gunwharf in Portsmouth. We needed a few bits and bobs so headed down there. It was a massive culture shock when we arrived to a nauseatingly manicured hub for the mad and ludicrously rich to spend thousands of pounds on sunglasses and handbags. Security clocked us as we walked up; greasy hair, jeans with coal smears, Poppy dog bounding along saying hi to everyone like she always does.

The security guard approached and asked if we were going into the village, and whether Poppy was an assistance dog (yes, our Poppy). When we said we were just popping in, we were told that if we wanted to bring the dog in, she had to be in a pushchair. It was so hard not to burst out laughing. The woman offered us a toy poodle sized buggy, but politely recognised that it might not be a practical solution to the dog problem. We decided at this point that the place probably wasn’t for us. Laura still insisted on taking advantage of the facilities, so after she’d had a decadent wee and plastered herself in the luxurious free toiletries we made our escape. However, we both regret not trying Poppy in the pushchair. It would’ve been very special.

So for now we’re home, sitting tight, hoping that we’re up and running and back on the move by the end of next week. And if we get really bored or fed up, we could always head back to Bicester and put Poppy in that pram.

One thought on “Emergency calls only”